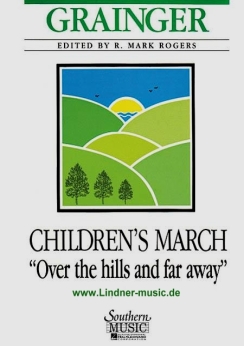 Children'S March Over The Hills And Far Away, Percy Aldridge Grainger /R. Mark Rogers -
Percy Grainger's extraordinary scoring skills permeate this classic, carefree work for symphonic band. Children's March: “Over the Hills and Far Away”, originally a piano solo, was orchestrated by the composer while he was a member of the U.S. Coast Guard Artillery Band. It includes two unusual scoring elements for the time - a prominent part for piano (cued in the winds), and brief four-part vocal interludes to be sung by members of the band (or a small chorus ad lib). Grainger believed that the greatest expressivity could be found in the lower instruments of the band (particularly the lower woodwinds), and Children's March includes a liberal and highly specialized use of the bassoons, English horn, bass clarinet and low saxophones. The march was first performed by the renowned Goldman Band in 1919, and was recorded in its original form by the same band with the composer conducting. (Full set includes a vocal score.)