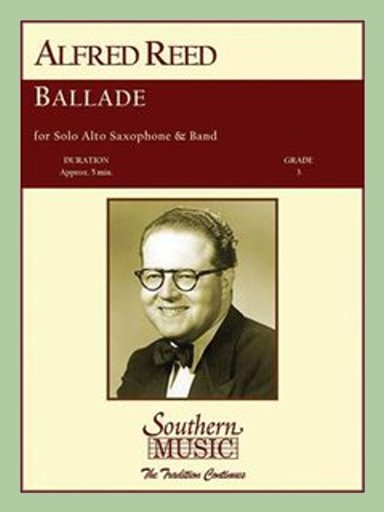 Ballade was written for Vincent J. ("Jimmy") Abato, a brilliant virtuoso both on the Clarinet and Saxophone, and was first performed by him at the Gunnison Summer Music Camp, with Mark Hindsley conducting the Camp Band, in 1958.

Ballade is now available with a full score.

The ballade, or ballad, form is one of the oldest secular forms in western music, and although ballads, especially those associated with both sacred and secular texts of all kinds can and have been written in various ways, covering many styles of musical settings, it is largely with the slower, lyrical textures that Ballad have been identified. The presant work follows this procedure, and its single main theme, accompanied by two smaller motifs, is developed in a continous fashion, affecting many suptle changes of mood and color, even though almost every single measure is related in a close or distant way.

In deference to the French school of saxophone playing, which was taken as a basis for the composition of this piece, the emphasis here is on the long lyrical line of brilliant but light color in the solo instrument. The soloist is accompanied by an always changing harmonic background of chords continously gliding into each other and separating, like the ever changing cloud patterns of the sky or wave patterns of the sea, thereby surrounding the solo line in ever shifting hues. The final section restates the theme in its original form but with a new pattern of harmonic color in the last measures that rounds off this free-flowing song in the most appropriate way.